One of the things Eve bought me while we were away was this: 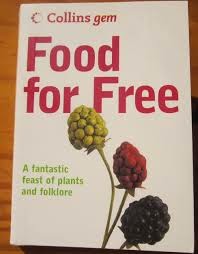 So the 'not surviving because we don't have foraging skills' argument may just have changed, which can only be a good thing.
Posted by stevecotterill at 03:14 No comments:

What I did on my Holidays

Last week Eve and I went on a break down to Kingston Upon Thames, partly because we had not been away for a while and in part because I wanted to go away as a treat for finishing the MA. There were things we wanted to see in London and also wanted to head down to Brighton to see the Pavilion and meet up with a couple of friends. We did not get as much done as we wanted, because of Eve's joints and because of travel times and the weather (November is not a month to go vacationing if you want sunshine, no matter what lies the end of October tells).

The first thing we went to was the British Library's Gothic exhibition (you can find it here). It traces Gothic from the very beginning to the modern day, with a strong focus on the original works and how the genre has changed over the centuries. It is stunningly put together, with loads of nice bits and some great film clips to illustrate the changing face of the Gothic. There was perhaps less of a focus on the work I'm most familiar with, writers like Poppy Z Brite and Storm Constantine weren't mentioned and there was no consideration of Gothic comics like Sandman (though your man Gaiman was not only mentioned but had been interviewed for the exhibition). There was a tiny bit about Goth subculture but that really amounted to some pictures from Whitby. Despite this I'd recommend going, if you're a fan of the dark and mysterious.

We had hoped to go to Highgate Cemetery, to take the tour of the West Cemetery and see Egyptian Walk, but we did not have time in the end. Its something to do next time though, along with popping along to see Karl, the only Marx not to do comedy.

In the evening we went to see Mr Turner and thoroughly enjoyed it. Timothy Spall was great, as were the other members of the cast.

The next day we headed down to Brighton. We're both slightly in love with the place and would love to move down there - but I think that's a pretty common feeling. We had been before, for FantasyCon in 2010 but had not managed to get to the Pavilion and it has been on our 'hit list' ever since. Outside the Pavilion is beautiful, a real standalone piece of architecture. Inside its mad and beautiful, full of Chinese inspired prints and designs, and surprisingly dark because of all the steps they have to take to protect the colours. I really liked the dragon statues and designs, the place is chock full of them and they're all beautiful.

The rest of the day was spent pottering about the city, we meant to go to the Lanes but because Eve was on the hunt for something from Dorothy Perkins we ended up at the big shopping centre instead. Fortunately we found what she wanted and more beside and next time we're going to spend a lot of time checking out the smaller, more boutiquey, shops.

Sadly we didn't get to see our friends in the end, one had succumbed to the dreaded lurgy and the other to a sudden need to move house. Again, next time we're down we're going to catch up with them.

Wednesday we came home, ditching our plans to go to the Horniman Museum in favour of getting home while it was light.

Still, good trip and a nice few days away.


Posted by stevecotterill at 03:04 No comments: