September is Suicide Awareness Month in the UK, spreading out about World Suicide Prevention Day on the 10th September (https://www.samaritans.org/media-centre/our-campaig….
In 2015 6,639 people committed suicide in the UK and Republic of Ireland. Most of them were men between the ages of 21 and 49. 75% of the people who successfully took their lives were male, while 25% were women. This isn't to say that more men than women attempted to take their lives, but the methods men use tend to be far more extreme and, sadly, are far more likely to succeed. It's important that we don't confuse the number of successes (and it feels horrific to describe them that way) with the number of attempts In fact, the numbers of women making attempts while the male rate has largely remained the same. That being said, it's still true that half of all male deaths in the UK under the age of 49 are the result of suicide. 50%. That's a truly sobering figure.
One person in fifteen will make a suicide attempt at some point in their lives.
If you feel suicidal please seek help, and please think twice about whether your life is as bad as your brain tells you.
If you know someone who might commit suicide please give them the time and patience they need. Please be kind to them and cut them some slack. Don't say to 'man up' or 'pull yourself together' because you don't know what's going on inside them.
Life gets hard for everyone, it costs nothing to show compassion to those of us who are struggling.

Posted by stevecotterill at 09:57 No comments:

Colleagues, Alumni, and Students, Members of the Public

It is with great sadness that Grimalkin University reports the passing of Professor Hobbes, the Dean of the School of Mischief (formerly the Department of Dastardliness), published scholar and expert on many areas in his field as well as others. He passed away peacefully on Sunday afternoon after a long period of illness and a troubling loss of appetite. While staff at Grimalkin did their best to care for him, by Sunday it was clearly too late.
Hobbes joined the university in 2005 as a Doctoral Researcher specialising in his twin areas of study, charm and cajoling as a form of human control. His catademic career spanned over a decade and he was a much loved member of the faculty, adored by students, staff, and visiting academics alike. He was always curious, keen to add to and spread the sum of feline knowledge by visiting other schools and institutions, indeed he often needed no more invitation than an open door. Much note was made of his Christmas Study Break one year, when he became stuck inside a friendly neighbour’s shed, and he was keen to undertake field trips at the start of his tenure, following humans to observe their behaviour and take notes. This sometimes worried his support staff, who  feared the worst, but thankfully he always returned safe and sound, keen to spread stories of his adventures. 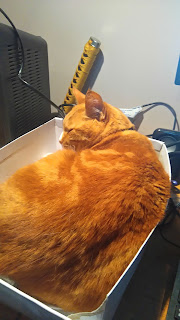 The same kindness was not extended to members of his team, at least once he took a dim view of their decision to spend time away from home, because they had neglected their duties. His attitude towards ‘staff’ was one of overly familiar love (research assistants report that no body part was safe from his curiousity) and this attitude spurred him to write his famous research paper ‘toes the new fingers’ as well as other pieces of research.

His defining characteristic was his charm, which colleagues always spoke of highly, along with his friendly, playful attitude that never took in the idea that he might not be loved and accepted. A devoted shoulder rider with a love for tall people, a refusal to allow him ride along on what he saw as his natural perch was met with confusion. In a similar fashion he viewed board games as a natural place to sit down and frequently made it plain that other forms of entertainment were not to be considered valid because they didn't involve him. Even typing up his research was a challenge because he, having moved onto his next project, would want to conduct fresh research. His friendliness was legendary, as was his even pawed nature, and he was a demanding, loving, person to all he met. A natural extrovert, he was more than keen to introduce himself to his research team when they met, insisting that they give fusses and allow him to swap between their shoulders for a long time.

Among other cats he was gregarious, and his curiousity tended to get him into trouble. Even his patented ‘sumo leap’ move for his favourite sport, wrestling, failed to win him friends in the cat community. Sadly, when he did find a wrestling buddy it was shortlived and soon, he had to return to insisting that staff provided that service. Unfortunately when Dr Dita von Minx, head of the Deportment School with a side line in Playing only when Unobserved, joined the university it didn’t lead to peace and harmony, but to a ten year guerrilla conflict centred on where she was trying to sleep. As the senior catademic, Professor Hobbes was quite sure of his right to do this, insisting that she liked it.

His work appeared in many journals, supplementing his enviable publishing record.

He will be much missed by all who knew him, and by many who did not.

I feel I should explain why I wrote the above and to say something personal about Hobbes’ death. When we got him, he was a lively, playful cat, keen on ambushes and on catching hands and feet. As a joke I said that he was studying for a PhD in Dastardly Studies and he continued to live up to that for a long time. When I started working with actual academics I realised he’d been studying for that Doctorate for a long time and updated the joke, making him a Professor. About the same time I made up an academic career for our other cat (who was more burlesque artist than scholar but never mind), and it all sort of stuck.

Hobbes was an amazing cat, a proficient hunter, an adventurer, and a gregarious fellow (at least by cat standards). He adored fuss and cuddles, purring whenever he was picked up as well as whenever he played. He  liked long naps on laps in the winter and his weight was always a comfort. It was even better when he curled up on my chest. He had the most amazing spike up his nose and I adored rubbing his chest (which he always seemed to enjoy too). I was always a naughty human and liked to stroke his tummy which definitely was a ‘bad human’ move, but I persisted because I loved him and I don’t think he really minded.

He was my cat, my best friend, and I feel as if he was a part of my heart and soul (assuming I have one). I will always miss him. 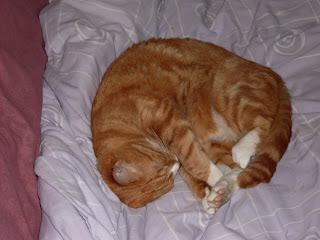 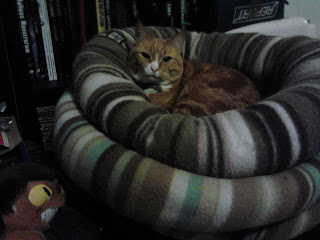 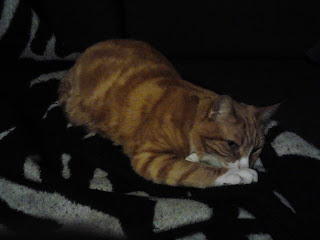 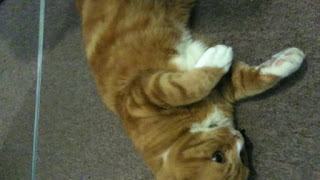 Posted by stevecotterill at 13:20 No comments: