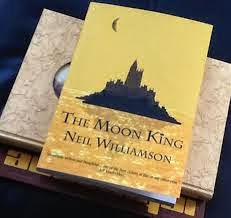 Fresh from NewCon Press the Moon King is an interesting, in some ways challenging, read. Set in the island city of Glassholm, a place with a more intimate relationship with the moon than is perhaps healthy, the book follows a number of plots; focusing on a group of characters whose paths cross but each of whom has their own distinct stories within the narrative.

The moon is held captive above the city and as it progresses through its cycle the city changes, and the people change with it. This creates two dangerous times Full and Dark which are significant to the story's development. Owing to its relationship with the moon, Glassholm is isolated and considered strange within its world and, in general, the reader is given the sense that the city's inhabitants are incurious about the world beyond their island.

Essentially a mystery story, one  beginning when an engineer wakes in the palace and is informed he is the king, the Moon King is an exercise in peeling back the layers that make Glassholm what it is, uncovering the truth about its past. Without wanting to reveal too much, by the end of the book Williamson has answered pretty much every question and seems to have revealed every secret the city holds. It must be said that the world building is well handled, the city has a sense of layers that build up into a credible place, even if I was not always sure of how Glassholm was laid out (a map would have been useful). The legends within the book carefully feed into the narrative, establishing a true sense of myth in what feels like a post apocalyptic world, though this aspect is treated as simple historical fact; even as a few characters struggle with the legacy of ancient machinery they do not understand.

The characters are believable and solidly written, with well conceived relationships. They are nonconformists and outsiders; something that proves to be important later in the novel.  Williamson proves to be an understanding author, giving a grounded and sensitive perspective of the various challenges he establishes for his protagonists without tipping into preaching or making it feel as if their travails are inconsequential.

Sadly the pace is sometimes not as engaging as it might be, I found the start of the book a struggle because of this. Also the disparate plots and characters make the beginning of the story strangely disjointed, there's no sense of connection between the various elements until later and whilst I would recommend persevering, it is a little confusing to work out how everything fits together.

All in all this a well thought piece of fiction, with a fresh perspective on the genre. If you are looking for a new challenge then this could be the book for you.