30 Blogs of Night: A Life With Cats

Today I'm going to talk about my cats. I have two, one ginger tom called Hobbes and a brindle Tortoiseshell called Dita, who looks like she was painted by an enthusiastic toddler, keen to use all the colours they had access to. We've had both of them long enough that they both qualify to join our local vet's 'after eights' club, designed for the care of older cats and Hobbes is old enough to be considered geriatric in cat years, being around 80. To which all I can say is that if I get to that age and I'm as active as he is, I'll be a happy man.  The fact that at sixteen he still runs around like a lunatic, plays with us and tries to eat hands is something I celebrate, though admittedly with less enthusiasm in the case of the last point. Cat teeth and claws hurt, and Hobbes has claws like glass at times. Both of them are in okay condition, but they both have issues that need addressing, and we're now so familiar with the vets we don't need to check in as the nurses know us by sight. 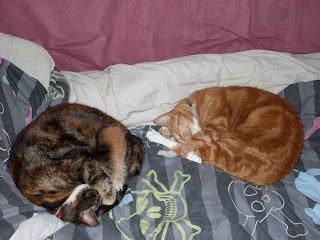 The reasons for this increased familiarity with the vets is two fold. First Dita is on a diet, so we've had kitty weigh in club every month or so to make sure she's losing weight. This is a pain. Dieting a cat is very hard to do, and even more difficult when you have two of the little creatures.  We've slowly reduced the amount of food we give her, but rather than adapting to the new amount, she consistently asks for more, and though she hasn't had milk for well over six months, she knows exactly what the milk bottle looks like and that the contents are delicious - making tea has become an endearing obstacle course across the kitchen as she tries to get your attention and asks for milk. She's a lot more active, thanks to the diet and us encouraging her to play more (treat balls and laser pointers are wondrous things, especially when you have a princess who dislikes playing where humans can see her). The other side of her losing weight is that she's actually become more affectionate, more interested in sleeping on people and occupying laps. This is pretty new, both cats have had their stolidly independent 'we only sleep on you when its cold' phases but now that it's April,  her desire to occupy humans seems unabated. 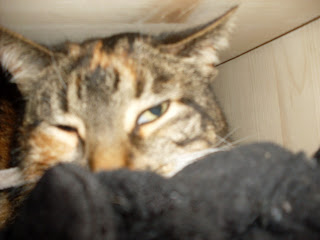 Hobbes has hit his first major medical problem for many years, though admittedly when we first met him he was recovering from cat flu, spitting pills out to leave in the corner of his enclosure at the RSPCA. He's had some teeth out and there's an ongoing issue with one of his forelegs, but they were all surmountable. The news we got a few weeks ago was that after some blood tests to see if he was okay to have his teeth cleaned (which cats need to be sedated for). We'd noticed h e was getting bonier, which Eve didn't like, and he seemed 'hangry' a lot of the time, wanting food and being more inclined to snap at me (believe me, its a good thing he's so cute).  The blood tests revealed he has hyperthyroidism, It's hard not to take that as a sign of his age, a sign that he's getting older and slower and that we may be at the start of a slippery slope. I took him for blood tests this morning, so hopefully after the weekend we'll find out there's nothing else wrong with him. 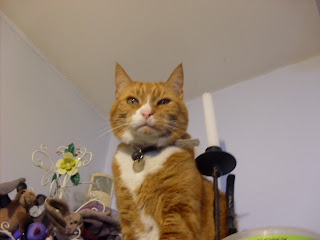 I can't focus on the bad things with either of them. Not only is it just going to wreck my 'relationship' with both of them if I only see the issues they face, but they deserve better, they deserve to be true to their natures, Both of them are adorable, both loving and cuddly (though the girl cat does tend to turn into an experimental jazz singer if you hold her too long). Hobbes remains as fond of shoulder riding as ever, and spent a goodly amount of time on my friend Victoria's shoulders not so long, clearly approving of how comfortable they are. He's unchanged at his core and I still see the cat I met nearly ten years ago who happily spent over an hour swapping from my shoulders to Eve and back again, showing how much he'd deceived us the first time we met him; when he was all subdued from cat flu. He's still the same cat who I teased about studying for a PhD in a Dastardly Studies, only now he's a Professor in the subject, a catademic who teaches the kittens how to torment your human minions, turns in papers on poking, as well as dealing with funding disputes at Graymalkin University (yes I named the university, and the department... I'm a saddo*)

I know he has a girlfriend at a neighbour's house, that he continues to visit the neighbours houses, and that he rubs along beautifully with two boy cats who live next door, and who were probably his first proteges/research students. He happily potters about, saying hello to his friends and being lovely. If he hasn't killed anything (as far as I know) for a while I'm actually okay with that, for all that we got him to be a mouser.  As long as humans tell him he's beautiful and let them sit on their shoulders, he's going to be a happy boy, and I love him for that.

Dita is content in herself, happy to bumble along doing her own thing. There's a slight fly in the ointment in the form of a new Queen living next door, but we seem to have a 'ignore each other and it'll all be okay', situation.

They both make me so happy, I could just spend the day reading around them and feel it was a day well spent. I don't joke when I say they're the apple of my eye. I wouldn't change either of them for the world, and I say that as someone who grew up around cats. They have been the best thing in my life for a while, and even though they don't understand English, they know all my secrets.


* My leg has been clawed, I think Hobbes is telling me he disagrees.
Posted by stevecotterill at 06:44